Gifted / I have been away from blogosphere for months now, due to personal things that happened in my life (I became a mother) but also because my computer broke and I didn’t fix it until today.

However, I started to miss this part of my life so badly, that I decided to run my blog from my cell, until this corona madness stops and I’ll be able to work on my laptop once again.

Today I bring you four reviews for books that I have read while I was away.

All of them I received via Netgalley, in an exchange for an honest review.

Such a Fun Age 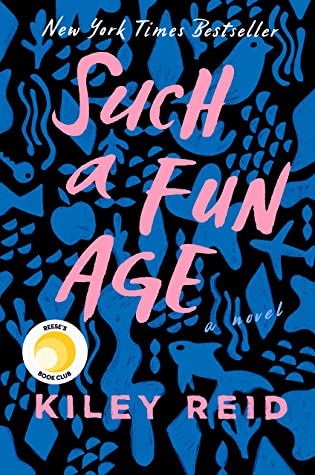 I was so happy to have a chance to read Such a Fun Age, and when I heard it was chosen as Hallo Sunshine pick for January, my excitement was huge.

Such a Fun Age was such an amazing book.
No wonder it took bookish community by the storm! It is well deserved.

In my honest opinion, this is the perfect book for reading clubs and buddy reads, as it’s thought provoking.

While talking about race, classes, one’s place in the world and people’s relations, it is very enjoyable to read.

As I already said, it deserves all the success.
I expect this brilliant debut to be on many bloggers’ lists of favourites of 2020.

It is no secret that Trisha Ashley is dear to my heart.
I usually love her books and appreciate her as an author, so when she was coming out with her new Christmas novel The Christmas Invitation I was pretty excited.

Unfortunately, this time it didn’t work out. And it is probably me, not the novel.

You see, I had hard time concentrating on the story, was lost when trying to figure out what was going on and to be honest, I mistook characters more then once.
I blame the fact that I read it during last trimester of my pregnancy, when was so hard for me to focus on anything.

The story follows to POVs, one written in first person, and another written in third.
At first I wasn’t a fan of it, but then I realized that it helps me to focus on which perspective I was reading, so I started to like it.

Maybe I should give this book another chance once again in few years, and see what I’ll think about it.
Maybe I’d like it more the second time.

I read You, Me, Everything when it first came out with aim to review it.
But life happened and I postponed and postponed my review writing until I realized I didn’t feel comfortable to give it proper review, because the book wasn’t fresh in my mind anymore.
But I loved it so much.

Then I decided to reread this masterpiece and even though I rated it 5 stars the first time I read it, I can say I appreciate it so much more the second time around.

What changed is I became a parent and I understand now the things I didn’t before, and I can say that I read You, Me, Everything with a new perspective.

This is the book where the characters make the readers appreciate their own lives.
Maybe it sounds dramatic, but once you give this book a chance, you’ll understand where I’m coming from.

The writing style was amazing, like it always is when it comes to Jane Costello (Catherine Isaac is pseudonym).
The story is written in first person.

I know there was movie production for this story, but I don’t know where it stands right now.
However, I hope we’ll get a chance to see You, Me, Everything on big screen.

I definitely recommend this one!

This was really good book that talks about important topic called pedophilia. It should come with trigger warning, even though some would consider it a spoiler.
I agree that it is spoilery, but then again, I think it’s better to know what it is about then to have unwanted flashbacks of your own unpleasant experience.

The only downside to the story is it’s predictability.
Then again, maybe it was predictable to me, because I do have experience with a pedophile (I talked about it in my review for Living Dead Girl).

The writing style was really good and very easy to follow.
There were all kinds of characters, all gray in their own ways, and after a long time I found a character that really got on my nerves that I started to feel the similar thing to hate. If I said I hated her it would be too strong of a word, but it wasn’t far from that.

I also appreciated the creepy vibe of small town this novel provided.

In the end, I would recommend this book to lovers of dark mysteries.