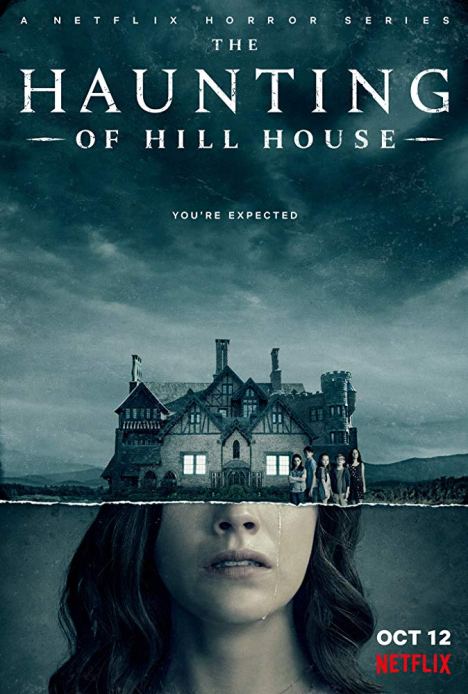 I know I am a whole year late, but as they say, better late then never!

The Hunting of Hill House was on my to-be-watched list since it first came out in 2018, but somehow I never had enough time to really commit to it.
You see, when it comes to horrors, I like to watch them alone, to make the most of them.
Since this series has 10 episodes, I didn’t want to have long periods between episodes, in wait to have that perfect setting to enjoy the show.

However, now when I’m pregnant and don’t go to work, I finally have some time on my hands and I take advantage of that, to finally keep up with everything I wanted to watch.

The Hunting of Hill House was recommended to me by my colleagues who’ve seen it, and also by many people who happen’ to have Netflix and gave it a go.

I was told it was pretty scary, and from what I understood, the book this series is based on is taken to be one of the scariest books out there.
So scary was what I expected.

However, since I grew up watching horrors, it takes a lot for me to get scared, so if I said that the series fulfilled my expectations, I would lie.

It is a great show, though!
I just didn’t find it as scary as I hoped it would be.

The story follows family of five siblings and their father who lived together in the Hill House for a summer. The house was hunted and it impacted the rest of their lives.
There are two storylines, one that follows them as children, while they were living in the house, and the other that shows them as adults.

I know it’s not usual to put trigger warnings in reviews of tv shows or movies, but I think people should be warned that some scenes in the show could be triggering.
There is a storyline about drug addiction, with graphic scenes that show drug use.
Also, there is a storyline about child loss that, in my opinion, could also be triggering to some.
I believe there are also some parts of the story that could be considered as such, but these two are the ones that I caught.

The best episode, in my humble opinion was the fifth one.
On the contrary, sixth episode was so boring that I had to fight sleep while watching.

Overall, I think The Hunting of Hill House is a good story with good ending (although there was one thing I found illogical, but if I tell you what it is I would spoil you).
I liked this Netflix show more for it’s story then for the scary elements, but I am so glad I watched it and I will definitely watch the next season as well.