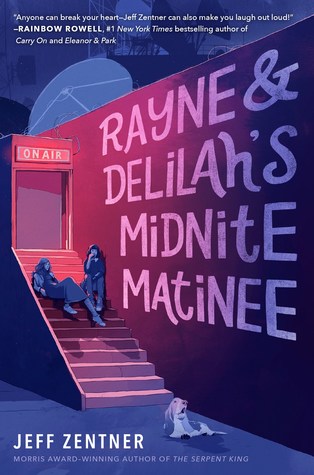 After spending some time only reading adult fiction and non fiction, I found myself craving some ya literature. I already read some fantasy this year, but what I really wanted in my life was good ya contemporary, since it was my favorite genre for the longest time.
This novel reminded me why I love this genre so much, and even though it wasn’t a 5 stars book for me, or a brilliant masterpiece, it still made me feel that familiar feeling you have when you return to something you love after a long time, and only from that point only, hours spent with Rayne & Delilah’s Midnite Matinee were worth it.

The story follows two best friends: Delia and Josie who work together on a TV show in which they talk about horror movies and they also show old cult horrors.
Josie wants to spend her life working on tv, so the show is her step to start her career, while Delia does the show in hope that one day her father will recognize her and make connection.
Delia doesn’t want for Josie to move on after the graduation, because she doesn’t want to be left alone.
On the other hand, Josie knows she has to move to another city to go to college, and she feels bad about leaving Delia behind.

I liked how the story shows the reality of life. It pictures perfect how hard  it is to succeed, and how many people try to reach their dreams, but they don’t.
Sometimes people do their best, but there is a reason why they say that success is hard work + luck + good connections.

The story is written in two POVs, Delia’s and Josie’s, both written in first person.

I liked each point of view, but if I have to state one that I liked better it would be Josie’s.
Maybe it’s because of Lawson, who is her love interest, and is also an interesting character who contributed to the story with his amazing personality.

It is kind of sad for me to say that I liked the girls the best when they were separated.
I know, it sounds awful, especially because this novel is about friendship, but I have to be honest. Together, they sounded kind of rude, especially when they talked to strangers.

Also, one down side of this novel were dialogues. They mostly sounded too forced. They were too much, and unrealistic.
But then again, maybe teenagers do talk that way these days, I wouldn’t know for sure. All I know is that I didn’t click with the way characters talked in this story.

It is still pretty early and there are not many reviews for this book, but from what I see most people enjoyed this novel more then I did, so keep that in mind when reading my thoughts.

I would recommend this book to young adult contemporary lovers.