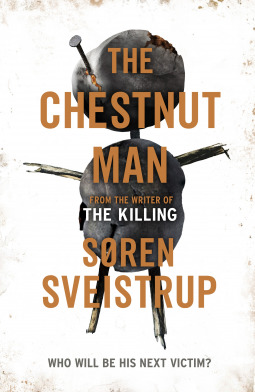 I am so honoured to be today’s host in The Chestnut Man blog tour.
I want to thank Jenny Platt from Michael Joseph, Penguin for inviting me.
I just loved this gripping novel so it is my honour to tell you everything about it.

Rosa Hartung is returning to her job as Minister for Social Affairs, a year since the disappearance of her twelve year-old daughter. Linus Berger, a mentally ill young man, confessed to her killing, but can’t remember where he buried her dismembered corpse.

That day a young single mother is found murdered at her home in the suburbs of Copenhagen – she’s been tortured, and one hand has been cut off. Thulin and Hess, sent to investigate the crime, arrive to find a chestnut figure hanging from a playhouse nearby.

When yet another woman is murdered, and another chestnut figure is found, Thulin and Hess begin to suspect that there’s a connection between the Hartung case and the murdered women.

Thulin and Hess are drawn into a race against time, as the murderer is on a mission that is far from over . . .

It seems to me that everyone already knows about Soren Sveistrup because of The Killing, but since I’ve never watched it, this was my first time encountering his work.
It will definitely not be the last, because my Soren Sveinstrup journey just began!

In case you didn’t have a chance to see The Chestnut Man in person, let me tell you: it is a massive book. It has more than 500 pages and bigger format than usual novels. You could easily use it as a weapon!

But despite this novel looking intimidating at first, it reads really easily because of the short chapters, intense story and great translation.

The story follows two main characters, detective Naia Thulin and investigator Mark Hess who work on the case together. The murders they have to deal with are not easy on the stomach because the killer likes to do amputations while the victims are still alive. On the crime scenes, there is always one little chestnut man, as a mark of a killer.

There is so much more to the story, because we follow so many characters who’s stories intertwine.

At first it was bit hard for me to follow and connect everything and everyone, because of so many different characters with to me unusual names, but after some time (around 80 pages into the story), it became pretty easy to follow.

This crime novel is the first one that reminded me of The Girl with the Dragon Tattoo. Even if their stories are totally different, I recognized the similar dark atmosphere.
If you like Stieg Larsson, don’t miss out on this one!

This book really pulled me in. I was so invested in this gripping story, wanted to know everything and solve the crime myself, but also it made me want to know why characters acted the way they did, and what is under everyone’s surface.

The Chestnut Man is a brutal, chilling story that made me question are psychopaths really born that way, or do they become what they are because of others?
I think it’s both, and I think the second plays the main part what will become of a person.

Overall, I recommend The Chestnut Man to every single crime novels fan.
This book is the one that should be on everyone’s tbr-s and I predict that by the end of 2019 it will be on many people’s favorites lists.