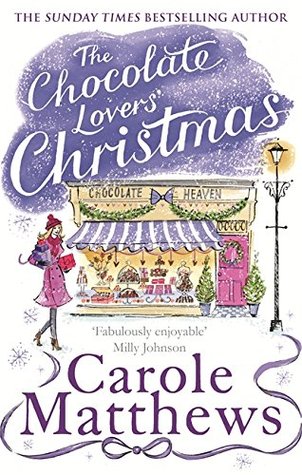 Synopsis (from Goodreads): Christmas is just around the corner but the women of The Chocolate Lovers’ Club have more to worry about than present shopping . . .

Lucy loves running Chocolate Heaven but she hasn’t spent time with her boyfriend, Aiden, in weeks. And then her ex-fiance turns up and things become even more complicated.

Nadia hasn’t let herself get close to a man in a long time, yet she can’t help feeling drawn to Jacob. Will he be her last chance for a happy ending?

Chantal and her husband, Ted, are besotted with their baby daughter Lana – but she’s not sure that’s enough to base a marriage on.

Autumn is dealing with a tragedy that has hit too close to home. But when she doesn’t get the support she needs from her fiance, will she look elsewhere for comfort?

Can friendship overcome all in . . . The Chocolate Lovers’ Christmas.

If you’re into chick lit, you’re probably familiar with an author Carole Matthews.
She’s one of the most known writers of women’s fiction, with (I think) 30 novels written.
Also, her stories always come within the most adorable covers, so it’s hard not to pay attention to her work.

Being devoted reader of women’s fiction, I wanted to read her work for the longest time.
After few years of putting it off, I decided it was about time to finally grab one of those gorgeous paperbacks and start reading (plus TBD bargain section helped me to decide which one to choose).

The Chocolate Lovers’ Club is the third book in the series but it can be read as standalone.
However, if you want to read this book, I encourage you to read previous books first.
The reason why is because so many things happened in the first two books and, although an author mentioned them through the story and tried her best to keep new readers on track, I think that if I’d read the series in order, I would understand the characters better.

The story follows four women who are best friends whose love for chocolate connected them.
As the author herself said it in her letter to readers at the end of the book, the reason why she wrote this series is to show how women can be there for each other without judging one another.

I understand where she was coming from and I can say she solidly succeeded in her goal, but yet these women were so much different from where I come from, that even though I tried to go with an open mind into this story, at times it was really hard for me to understand them.
There is no girl code (one woman was one’s guy mistress and now her friend is dating him), with questionable morals (cheating and not knowing who your baby’s father is) and easy to fogive approach (becoming fast friend with your husband’s ex mistress who has his child (who’s by the way the same age as yours)).
If you’re a type of reader who avoids all of the above in their books, maybe this book is not for you.

The writing style is really, really good. I’d say it is the best part of this piece. Carole Matthews uses her words in a way that makes you fly through the story. That only is enough reason for me to want to read more of her work.

However, I wasn’t the biggest fan of how this book was concepted.
It follows four POVs, one of them (Lucy’s) written in first person and others all written in third person.
To be honest, I still don’t understand why Matthews chose to write her book that way.
For a really short period it gave me that Sex and the City vibe, in which Carrie tells the story, but then I realized that in those chapters that were written in third person when Lucy was mentioned, she was being Lucy, and not the person who tells the story, so that’s what confused me.

And while we’re talking about Sex and the City, I can say The Chocolate Lover’s Christmas is like a lighter version of it, only set in London and without parties.
Even some scenes reminded me of ones from that show. They would be amazing, if only they were original.

Overall, The Chocolate Lovers’ Christmas is a quick read perfect to put you into the festive mood, but if you don’t like not-so-smart protagonists nor promiscuity, you probably won’t like this novel either.