This week I watched a romantic comedy, all by myself, and it was amazing! 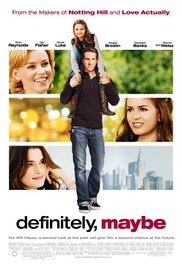 This romantic comedy came out in 2008, but somehow, I missed it. When I say I missed it, I really mean it: I didn’t know this movie existed until few days ago when I saw it’s trailer on our local tv. I know, I know, that must be really strange, I was confused too, especially because this movie is full of well known actors and actresses.

The story follows Will Hayes who is telling a story to his daughter about his life before she was born. The reason why he’s telling the story is to tell her how he and her mother got together, but there’s a catch: We don’t know who the mother is, because he changed the names, so his daughter has to guess which one from three girls from his life before ended up marrying him.

I really loved the way this story was told, because we also had to guess which girl will win in the end, and along with that, we got to cheer for our favorite or against the one we didn’t like.

I was really afraid that the girl I rooted for wouldn’t win, but the way this story resolved left me in a happy place.

Definitely, Maybe is chick flick by all means and I highly suggest it to everyone who enjoys movies from that genre.

Note: Picture in this post is not my property but taken from IMDb site and is property of UniversalMovies.