I feel like I haven’t posted Movie Monday in a while, and I watched A LOT of movies lately, so this week this meme will look a bit different then it usually does.

I’m going to mention movies that I have watched in the last couple of weeks and write just a brief reviews for them.

Nerve is the latest movie I watched. I saw it yesterday, in the company of my sister and her husband. We all ended up liking it very much, which was quite surprising for me. I didn’t expect for it to be that good, but I wanted to watch it because I love Dave Franco, and I like Emma Roberts. This movie is based on young adult book that I haven’t read, but I would like to. I have to admit that I didn’t do my research so I don’t know if this is a standalone story or is it a part of the series.

Fantastic Beasts and Where to Find Them

Me and my friends decided to spend American Thanksgiving Day in movie theatre. I wanted to watch Fantastic Beasts and Where to Find Them ever since I found out that Ezra Miller has a role in it (in case you didn’t know, Ezra Miller is my favorite actor (+Leo Di)). When the movie trailer saw the light of the day, I expected for this movie to be amazing.
The movie is full of beautiful scenes, great effects and tone of humour (even though it isn’t a comedy), but the story itself is predictable. I figured out everything there was to figure out, and I am not the smartest person in the world.
However, I have to stress out that I watched many interviews with actors and I think producers, PR team or whoever is in charge for those sort of things, are ones responsible because they forbid one actor to talk about his role and, that way it was easy to figure out certain things. They also gave a statement that another certain actor will play in movie number two, so they gave away a spoiler that way.
Ezra Miller was the best actor in the movie. That guy can really play every role. I am so glad his career is turning big lately. He really deserves it.
Eddie Redmayne  was also good, but the more movies with him I watch, the more it seems to me that he plays his roles the same way, if you know what I mean.

Scouts Guide to the Zombie Apocalypse

The best comedy I have watched this year! I watched it with my sister’s husband. It was so funny, I laughed so hard that even their dog came to check out what is happening to me. This is perfect movie to watch with friends. I dare to say that the story itself is stupid in a way, but the movie is so entertaining and funny that you’ll be glad you picked it up. 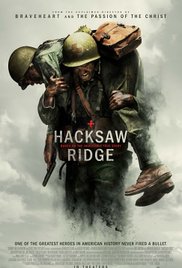 I went to see Hacksaw Ridge into movie theatre with my boyfriend. This movie is based on true events that happened in Vietnam war. The story follows a soldier who refused to touch any weapon, because of his beliefs. The movie is really good, but you should be warned that it contains really explicit scenes. I watched a lot of war movies, but this one was the most detailed one I have ever seen.

War Dogs is a drama about two guys who made money by selling weapons to American army. It is based on true events.
To be perfectly honest with you, the reason why I decided to watch this movie are it’s two main actors. I always loved Jonah Hill, and Milles Teller is one of my favorite actors from his generation. I always watch their movies, so this one was a must.
The story is pretty entertaining and I had a good time watching it, even though I understand why some people would find it boring.

Note: Pictures in this post is not my property but taken from IMDb site.