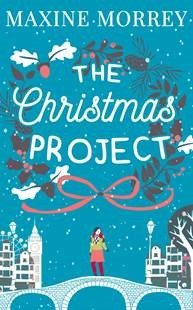 Synopsis (from Goodreads): Professional organiser Kate Stone has never – NEVER – been tempted to hit a client over the head with a snow shovel, but Michael O’Farrell is the most obnoxious – and heart-stoppingly gorgeous – man she has ever met. If he weren’t her best friend’s brother, she would not have waited on his doorstep in the freezing cold for five minutes, let alone an hour.

Kate knows, however, that her job isn’t just about tidying up, sometimes she needs to be part therapist too, and Michael clearly needs her help to declutter his heart as well as his home.

But with the festive season just around the corner there isn’t much time to get Michael’s house ready for the O’Farrell family celebrations, but everyone knows that at Christmas anything can happen…

I feel like I’ve been so lucky with my books lately.
Since HoHoHo readathon started, I read some amazing festive novels, and this one did not dissapoint.
Now, I only hope my luck will continue.

The Christmas Project has everything you want in a festive read: beautiful cover that catches eye, amazing setting with beautiful descriptions of surrounding, cold and snow, interesting protagonist and likeable side characters, hot guy and cute puppies.

I mean, what else could you ask for?
Just based on everything I just mentioned you should at least consider giving this book a chance!

The story follows Kate Stone, a woman who works as a professional organiser.
Her latest job is to help her best friend’s brother organize his house for Christmas.
After his divorce, he stopped taking care of the place he lives in and the beautiful house started to look like a mass storeroom.

Kate was, as I already said, an interesting main character. She has a good personality, but is somewhat naive. She is a hard worker, really organized and good at heart. She likes to help people and she spends her free time helping in an animal rescue center.

Michael is a mysterious guy, hurt by his ex. In my own words, after his divorce, he became a grumpy hoarder.

I like how their relationship evoluted from hate/dislike to friendship, and then started to develop into something more.

All of the side characters in this novel were plain good.
I am still not sure how to feel about it. I mean, the story is full of white (I don’t mean skin color), one dimesional characters (there were, of course, two “bad” characters, that were also one dimensional).
I didn’t like how “bad” characters weren’t mentioned anough in the story, especially when it comes to Kate’s boyfriend. I get that she spent almost no time with him, but I wish he wasn’t just mentioned as an absent boyfriend, I wish we got to see him more before the “big scene”.
Also, when it comes to Michael’s ex, I wish we got a chance to hear her side of the story, or anything that happened before the divorce.
In other words, I think negative characters weren’t explored enough.

The writing style is simple and you can easily read the story, as it reads pretty quicky.
It is written in first person, following Kate’s POV.

This story will wake up your emotions, at least it woke up mine.
I was angry, frustrated, sad, happy, felt the joy in my heart… And I swooned. A lot.

As the story was coming to an end, it became better and better with every page.

What I’m sure I’ll get from this book is I’ll remember one particular scene for a looooong time to come: (SPOILER ALERT!! the scene in which Lily (Michael’s little niece) says how she heard her friend’s mom saying that she thinks Michael is sixty (but in reality, that mom said sexy)).

Overall, this was a great festive story and I highly recommend it to everyone who’d like to read something quick and easy that will put a reader in a festive mood.