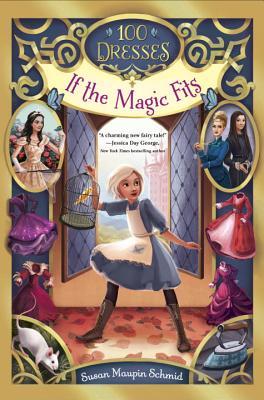 Title: If the Magic Fits

Synopsis (from Goodreads): Inside an enchanted castle, there’s a closet—a closet with one hundred dresses that nobody ever wears. Dresses like those need a good trying-on, and Darling Dimple is just the girl to do it. When she tries on Dress Number Eleven, something unbelievable happens. She transforms into the castle’s Head Scrubber! It turns out that each dress can disguise her as someone else. And Darling is about to have an adventure that calls for a disguise or two…or a hundred.

Do you still remember fairytales you enjoyed when you were young?
If you loved listening about enchanted castles and beautiful princesses, there’s a great chance you will love this story.

If the Magic Fits is a brand new fairytale, and it has everything a good fairytale should have: magic, dragons, friendly mouse, beautiful gawns that come to life at times, magical bird, princess, prince and a strong protagonist.

The only thing that this story does not have are witches.
BUT, you know that word that rhymes with the word witch, the one that describes someone’s personality?
Yeah, that one!
I’ll just say those kind of characters weren’t missing.

I wish I could go back in time and give the young myself this book so she could observe every single page of it.
I am sure 10 years old Irena would be in love with this story and it’s world.

The story follows 10 years old Darling who, at the very beginning of the story got a new job. She is in charge for ironning Princess’s clothes. While living and working in castle, she discoveres the beauty of magic that is presencing in the castle.
In the wardrobe full with old (or outdated) dresses, she decides it wouldn’t hurt if she tries one.
What she didn’t expect was that the dress will disguise her, give her a whole new look.
Looking as someone else, Darling starts an adventure as a spy who’s mission is to save Princess from people who want to use her position and harm the kingdom.

Ever since I heard about 100 Dresses series (back in March) I wanted to read it.
If you didn’t know, I am a huge fan of Flunked (Fairy Tale Reform School series) and the first book that pops up as a recommendation for it’s fans is – you guessed it – If the Magic Fits.
So I would lie if I told you my expectations weren’t high.
They were.
As a matter of fact, they were high as enchanted Empire State Building that yet has to be built in Enchantasia.

At first, I found it hard to get into the story. It took me around 40 pages until I started reading it at my normal reading speed.
I blame the fact that this book was written in the style that is similar to the writing style fairytales are written, and as English is not my native language, it took a while until I got used to it.
It also contents words that are not typical for every day life so that had some part too.

Darling was very likeable and admiration worth main character. She is strong, smart and a loyal friend.
The only thing that I could critise is how she acted too mature for 10 years old girl at times.
However, when you take in the picture the fact that she is an orphan since the day she was born, and all she ever did in her life was work, work, work, her acting mature and whise has some logic.

The story itself was very entertining.
I wouldn’t mind to see an animated movie based on this book some day (fingers crossed I will)!

This book is the first in the series, but the story it followed is completed, so it could be read as standalone.

Although this book would probably be a good read to readers of all age, I think that who will enjoy it the most are girls in age from 9 to 14.