I am happy to be today’s stop at Holding Court Blog Tour.
I really enjoyed reading this novel and I want to say thanks to Entagled Teen for providing me a digital copy of this book and to MaryAnn from Chapter by Chapter for giving me this opportunity. 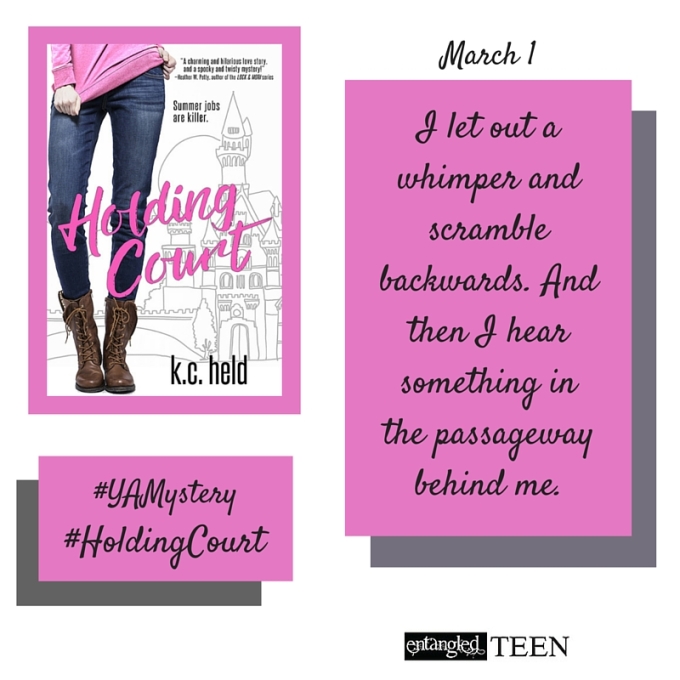 Sixteen-year-old Jules Verity knows exactly what’s in store at her new job at castle-turned-dinner-theater Tudor Times. Some extra cash, wearing a fancy-pants dress, and plenty of time to secretly drool ove
r the ever-so-tasty–and completely unavailable–Grayson Chandler. Except that it’s not quite what she imagined.

For one, the costume Jules has to wear is awful. Then there’s the dead body she finds that just kind of…well, disappears. Oh, and there’s the small issue of Jules and her episodes of what her best friend calls “Psychic Tourette’s Syndrome”–spontaneous and uncontrollable outbursts of seemingly absurd prophecies.

The only bright side? This whole dead body thing seems to have gotten Grayson’s attention. Except that the more Jules investigates, the more she discovers that Grayson’s interest might not be as courtly as she
thought. In fact, it’s starting to look suspicious…

Written in the first person, Holding Court follows a girl named Jules, who is „cursed“ with what she likes to call „Psychic Tourette’s Syndrome“.
If you’re confused just like I was and wonder what that could be, let me explain it to you: from time to time, Julie, uncontrollably, blurbs out what will happen to someone in the future, but she tells that pretty much in codes. Overall, the whole thing makes her a weirdo in other people’s eyes.

She’s not the only one with the gift. Her grandmother can see other people’s auras and her mother can tell authenticidy of an object with a single touch.

One summer, to make some money and save enough to buy herself a car, sixteen years old Jules gets a job in a place called Tudor Times.
Fun fact: Grayson, the guy she has a crush for years works there.
Funnier fact: her girlfriend Bree also works there.

Jules knew not everything will be roses and butterflies, but what she couldn’t even dream about was that, while exploring secret chambers of her workplace, she would find a dead body…

First thing I have to warn you about: there are some illogical happenings trough the story.
If you are a critical reader you’ll probably find it’s flaws and they could put you off when it comes to finishing this story.
However, I think it is only fair of me to tell you how, if you can play blind to those flaws, you will probably end up really enjoying yourself while reading.

Yes, the main character does swoon over the guy while she should be worried about the killer and about her own sake.
Yes, the story does have a love triengle (that is, let me make that clear, a really good love triangle).
Yes, the character does not act the smartest way possible at some scenes, but…

I also have to emphasize that I didn’t see who the killer was. Of course, I had my own suspicion, but I was wrong.

And now, let me tell you what I liked the most about this book: Love triangle.
At first, I tought about giving this book a lower rating, but what made me really appreciate this novel is the love triangle in it and the way it resolved in the end.
Maybe some would call it naive or unbelievable, but I like to call it refreshing.
I have never before read the story in which all love interests  wrap up the way they did here, and it never even crossed my mind that someday it would be great to read the story with that kind of result.
Just because of that,  K.C. Held deserves an extra applause.

Overall, this is an easy, quick read with a great atmosphere, perfect for spring or summer when you want to read something entertaining and cute.
The writing style is enjoyable, the story has something different to offer when it comes to love interest and the very last chapter is the best chapter in the whole book, which made me appreciate this piece.

K.C. HELD was born and raised in California with stopovers in Honduras, Mexico, and France. Married to her high school sweetheart, and mom to two avid bookworms, she holds an MFA in costume design and is an accomplished seamstress with a background in opera, theater, film, and television. Although she once spent a summer working in a castle, there were no dead bodies involved.